[LOG BOOK] Clara and Marie, our two volunteers in Myanmar, have arrived on the field exactly a month ago. After a first week of discoveries at the time of the Buddhist New Year, they met women entrepreneurs interested in our program, participated at events with the local partner YWCA and this week, gave their first training!

Week 1: Bank holiday and Buddhist celebrations to start in a good mood

On April 17th, the Buddhist New Year, called Thingyan in Burma, took place everywhere in South East Asia. In order to start the new year purified of all the sins of the past year, it is common to be sprayed with water on the days preceding. We couldn’t have imagined how often we would get purified!

For a long period, Thingyan was the only time when the Burman population was allowed to gather in the streets and celebrate. It is a crucial event in this country, with 5 consecutive bank holidays. 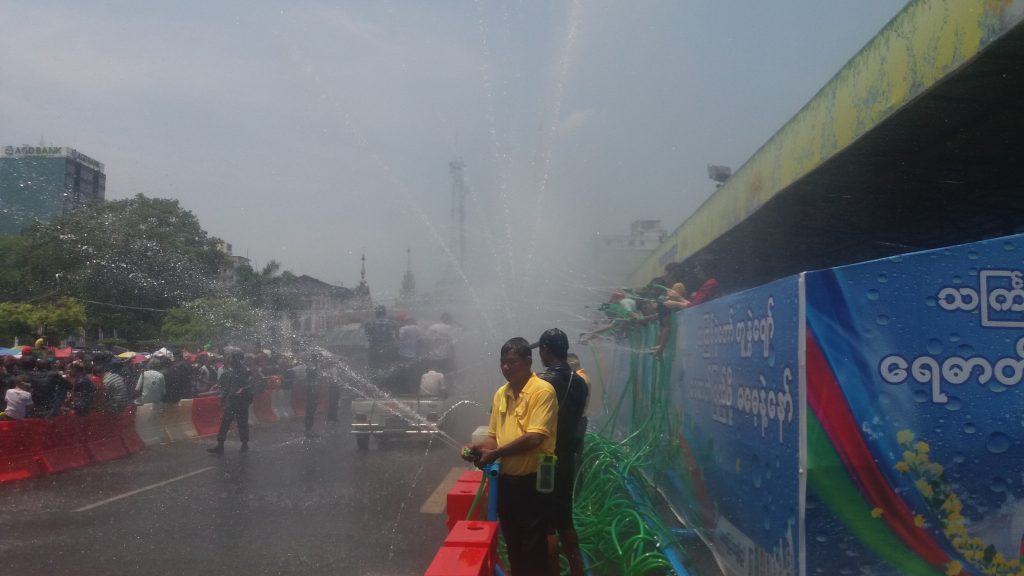 From April, 13, the water guns, fire hose, bowls, basins, cup, water jet, buckets, in brief, anything that allow to spray water on others, were called for in the entire city. Armed with our water guns, we went off to explore the city and we were not disappointed. The atmosphere was extremely festive: apart from the monks, everyone was spraying water on each other with a big smile. We reconnected with our inner child by surprising the Burmese with our water jets or by running in front of iced water bottles.

Week 2: Meeting with potential beneficiaries and discovery of the local traditions

This week, we went to Hwambi, a village on the outskirts of Yangon, to meet new women interested by our training program. Before integrating them to our group of current beneficiaries, we wanted to take the time to meet them individually in order to present ourselves and to understand their expectations and background batter; to visit their shops and to think together about the following months. 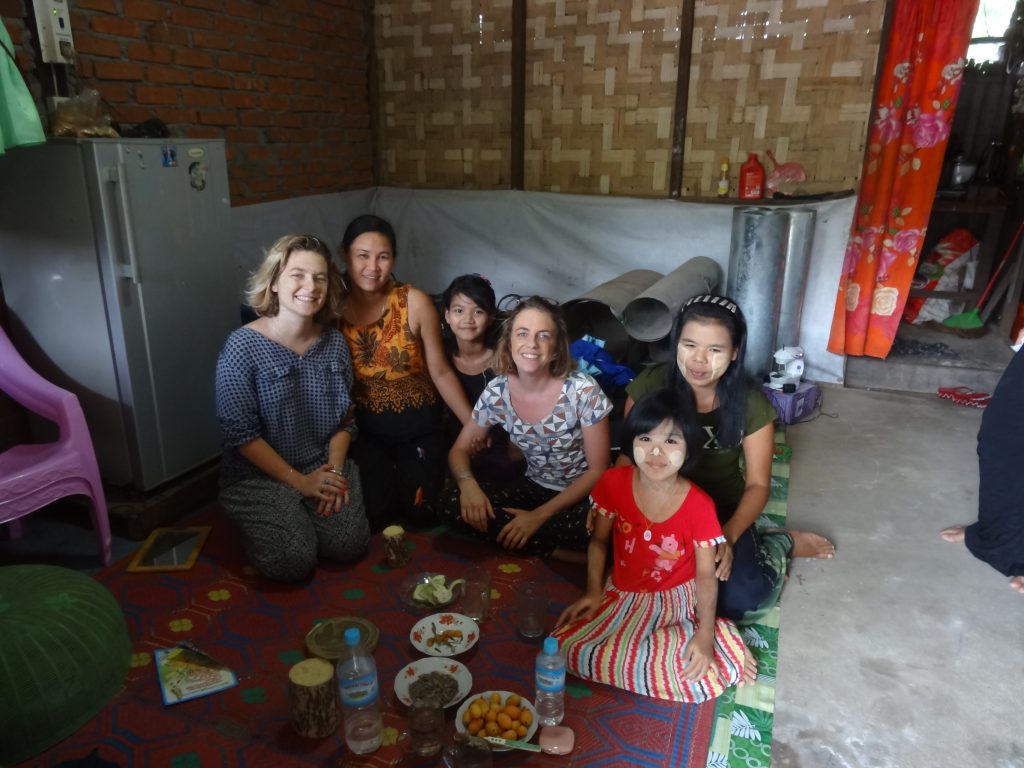 In the end, we did much more! Each of our house visits was a real moment of meeting, sharing, smiles, culinary discoveries (dried garlic fried: delicious), laughter, exchanges… In the course of a conversation, we mentioned our sunburn of the previous week and Swe Swe Lwe immediately took out her thanaka to avoid future burns.

The thanaka is a yellow paste obtained from bark from trees and water that the Burmese – women and children mostly – use to protect their skin from the sun. It has anti-UV, refreshing, antiseptic and decorative properties. Swe Swe Lwe spread a thin layer on our faces and the feeling of freshness resulting from it was very pleasant, especially as it is 35°C (…in the shade!).

Week 3: Work with YWCA and Rise Up!

Each year, the national entities of YWCA organise a big meeting within their respective countries in order to discuss the results of the past year, give the new guidelines and present the new aims for the year to come. The aim of this meeting is to inform the whole staff and to strengthen the ties between all the actors of YWCA (staff, volunteers, students…). The motto for next year will be “Rise Up!”.

As partners of YWCA, we were invited to this event. The majority of the meeting was held in Burmese, which made it hard for us to understand and follow the events of the day. Our colleagues alternated between speeches on the NGO, prayers, Christian songs and we were lost very quickly until we were asked to participate to the day’s photo session.  In that case, the concept was crystal clear: do a “W” (for Women) with the fingers.

We did not understand much in the proceedings of the event, but it was a great occasion for us to forge links with some of our colleagues and to meet new people, like the president of the NGO in Myanmar, Christina Poba, with whom we really enjoyed speaking.

Friday 5th May, a month after our arrival, we gave our very first training! We were assisted by two translators who tried to teach us the basis of Burmese during the two hours of our journey to Hmawbi. Entering the village, we were therefore very proud to know how to count up to 5. Even if we had already done the journey several times, we could not escape a detour of a few hundred meters by following the wrong direction.

For this first training, 7 beneficiaries were able to attend, all very motivated for us to work together. As they expressed the need, during the impact measurement in March, we included English classes at the start of the training. For the first time, the goal was to assess the women’s general level. After the revisions of the 5 quite simple questions/answers, we put everything in practice by throwing a ball at each other and asking a question at the same time: good atmosphere guaranteed! 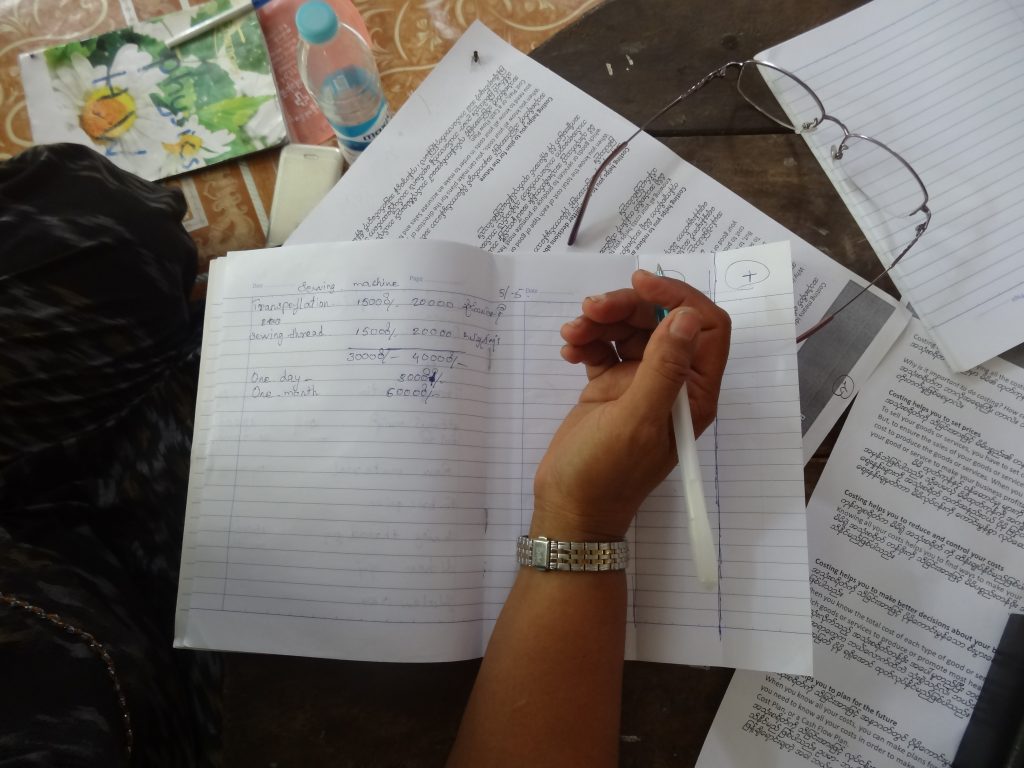 The second part of the training was dedicated to the basics of accounting. Each woman having different kinds of businesses, it was not always easy to find common grounding until we found a solution: the mohinga! The analysis of the costs of this typically Burmese dish made from fish gave a concrete framework to each beneficiary. And for next week, they have to put it in practice.

Oasis, a new and unique space in the heart of Niamey!

IVORY COAST – ASSOYA, our first Hub is up and running!